[Madison, Wis.] – Friends of Scott Walker on Tuesday launched a statewide digital ad campaign on high-tech manufacturer Foxconn’s decision to bring 13,000 jobs to Wisconsin, a historic announcement that will spur more than 30,000 additional jobs and transform our state’s economy.

“Foxconn’s investment is a once-in-a-century opportunity to transform Wisconsin’s economy, and an example of Gov. Walker delivering results for hard-working Wisconsin families,” said Joe Fadness, campaign manager. “The governor’s bold conservative reforms have Wisconsin headed in the right direction, and we want Wisconsinites to hear that message and see what a bright future our state has under Gov. Walker’s continued leadership.”

The statewide digital ad campaign is the centerpiece of Friends of Scott Walker’s digital spending ahead of the fall. It features graphics that will display on a range of online platforms announcing the 13,000 jobs and linking to a fact sheet that includes information on the announcement and the leadership of Gov. Walker, Speaker Paul Ryan, and other Republican leaders.

You can see the fact sheet here, and an example of the graphics that will display is below: 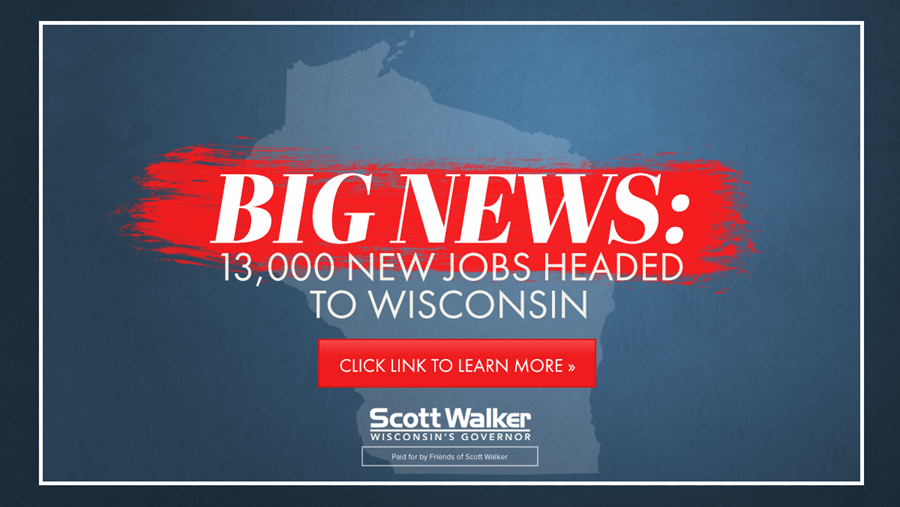 Paid for by Friends of Scott Walker

Grothman: Sue and Settle Process Undermines Our Form of Government