Obamacare Premiums to Explode 36 Percent in 2018 as 75,000 Wisconsinites Lose Coverage

Customers in the individual insurance market will be hit with the sticker shock on Nov. 1, when Obamacare’s open enrollment period begins, and 75,000 Wisconsinites who had coverage in 2017 will be shopping for new coverage whether they want to or not.

State officials announced the massive increase on Thursday, adding that 75,000 people will lose their coverage at the end of the year, mostly the result of several major insurers exiting Wisconsin’s Obamacare market in 2017. That’s a considerable chunk of the overall individual market, where about 215,000 Wisconsinites buy their coverage.

“Obamacare is collapsing, and these huge premium increases show the law failed on its promise to deliver affordable healthcare,” Gov. Scott Walker said in a statement. “While our state remains one of the best in the nation for health insurance coverage and quality, Obamacare is disrupting healthcare markets in our state and across the country.”

The finalized 36 percent average premium increase is three times larger than the preliminary 12 percent increase announced by the state Office of the Commissioner of Insurance (OCI) in August. The increase reflects the greater risk that a smaller number of insurers will have to take on by offering plans in a shaky, risk-riddled market, said J.P. Wieske, deputy commissioner of insurance.

The size of the price spike could indicate Wisconsin’s individual insurance market is in the “death spiral” that has gripped Obamacare markets across the nation.

“I think we’re sitting in a market where there is some concern that we’re in a death spiral, and the individual market’s experience is deteriorating,” Wieske said, adding the individual insurance market in Wisconsin has lost $400 million over the last three years. “That’s a very significant amount of money to have lost in just the individual market.”

“The fact that nobody wants to compete for this market despite the subsidies that are available to consumers, I think that’s sort of troubling,” Wieske said. 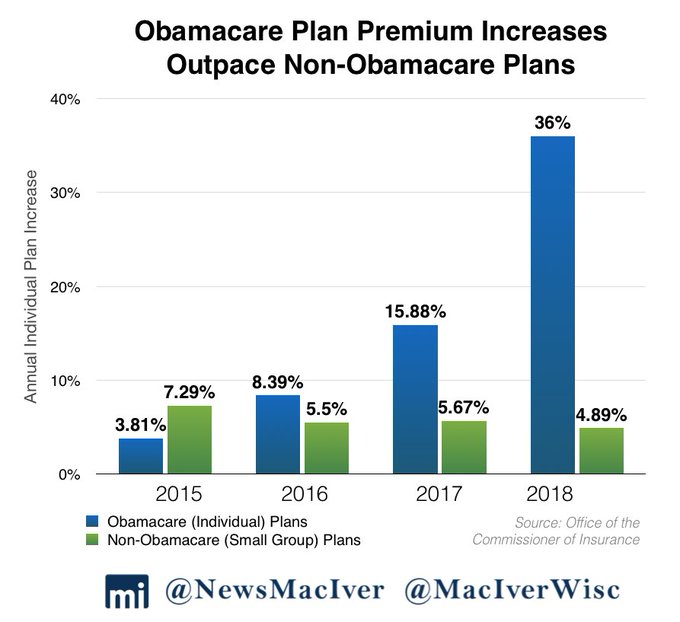 In 2017, Anthem Blue Cross/Blue Shield joined several other major insurers in dropping out of Wisconsin’s individual insurance market. They were followed by Molina Healthcare, the largest remaining insurer, which dropped out after proposing a rate hike of more than 40 percent. Health Tradition Health Plan, offered by Mayo Clinic Health System of La Crosse, also fled Obamacare this summer.

Anthem, Aetna, UnitedHealth, and Humana – four of the five largest health insurers in the country – all left Wisconsin’s market in the past two years. 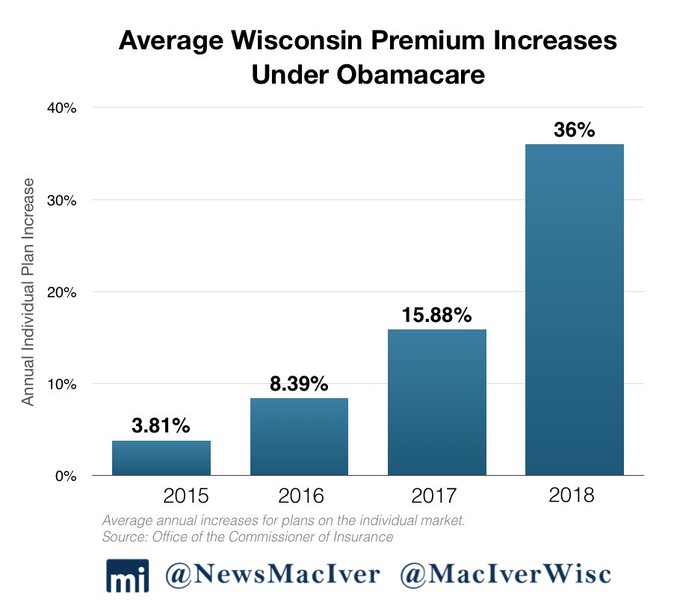 BREAKING: #Obamacare premiums in WI to increase an eye-popping 36 percent in 2018, according to @wisconsinoci. Story to follow. #wiright

Last year, premiums for Obamacare-compliant plans in Wisconsin increased 15.88 percent, the MacIver Institute reported in November. In addition, that analysis found the average statewide deductible for the benchmark bronze plan in 2017 was $12,414.46 for a family and $6,207.23 for an individual.

The price increases are the result of an older and less healthy group of enrollees, factors that have caused many of the nation’s largest insurers to stop offering plans on Obamacare exchanges altogether. Rate increases for 2018 will likely make the problem of attracting younger, healthier people to the individual market worse.

On average, 21-year-olds shopping for a Silver Plan, the second-lowest-cost Obamacare plan, will see an average premium increase of 51 percent, according to data provided by the OCI. Individuals that age can expect to see a 105 percent increase in Marinette and Oconto counties and a 77.27 percent increase in Outagamie, Sheboygan, and Winnebago counties.

In a statement, Commissioner of Insurance Ted Nickel said the OCI would explore options at the federal level to mitigate the price spike. “The ACA destabilized the Wisconsin individual health insurance market and federal health care reform efforts continue to face significant challenges…As a result, we are exploring our options available under the ACA Section 1332 Waiver for State Innovation.”

Wieske said other states, including Iowa and Minnesota, have used similar waivers to mitigate massive price spikes. Minnesota’s attempt to hold premium increases for those not receiving federal subsidies has cost the state $800 million.

“We stand committed to continuing our efforts in ensuring a stable and competitive market and affordable coverage for Wisconsin consumers,” Nickel said.

The decline in competitive markets has also played out nationally. While no counties are currently projected to have zero insurers, vast swaths of the country will have just one option on the individual market. According to the federal Centers for Medicare and Medicaid Services (CMS), 1,524 counties will have just one insurer offering a plan – nearly 50 percent of all counties. 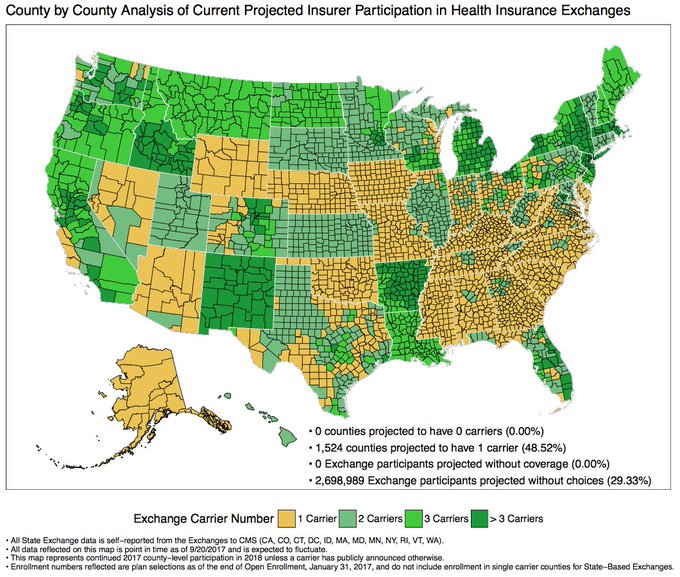 Obamacare requires insurance plans to provide a wide range of coverage in order to qualify for subsidies, reducing the variety of plans that insurers can offer and limiting choice for consumers. But on Thursday, President Trump
signed an executive order relaxing those mandates.

Trump’s action, which comes a month after the collapse of congressional Republicans’ efforts to repeal and replace Obamacare, is intended to allow insurers to offer lower-cost plans, a key to increasing competition and choice in the individual market and attracting younger and healthier people into the marketplace.

This article appears courtesy of the MacIver Institute.

Dolan Says Catholics Are Not Welcome in the Democratic Party

By the numbers: Wisconsin ranks 11th worst for police officers