Resolutions for the New Year for Wisconsin’s Political Class

As many Wisconsinites will make New Year’s resolutions, we thought that we would help write a number of resolutions for Wisconsin’s political class as a public service. Politicians by nature are not very introspective, so we thought we could help with some tips for a better 2018.

Assembly Speaker Robin Vos (R-Rochester): Don’t text angry. Instead of sending angry text messages to Vos’ fellow Republicans that will only be uncovered later via open records requests, Vos should just type them up and drop them off at the press office at the Capitol.

Republican candidate for US Senate Kevin Nicholson: Speak less through campaign spokesmen. Republican voters are judging you, not your consultants.

Milwaukee Mayor Tom Barrett: Resolve to stock up on candles. Your streetcar construction is going to cause more blackouts when those utility lines you didn’t pay to move get hit.

Republican members of the state Ethics and Elections Commissions: This year, resolve to grow a spine instead of just going along with the Democrats’ defense of the staff members’ conduct during the John Doe probes.

Assembly Democrats: A good resolution for you would be to look in the mirror before you accuse Republicans of being anti-women. Every last one of you voted for state Rep. Gordon Hintz (D-Oshkosh) as your leader. No wonder state Rep. Josh Zepnick (D-Milwaukee) sees no reason to step down.

Governor Scott Walker: This is the year not to mention the Green Bay Packers during your State of the State speech and during your campaign speeches. Resolve to stick to the Badgers.

State Superintendent of Public Instruction Tony Evers: You have a lot of resolutions that you could make, but we’ll pick just one that you could possibly keep. Resolve to stop lying about studies about school choice. When you claim that no studies show the effectiveness of vouchers, all you do is reveal that you never should have been re-elected to your current position.

State Rep. Dana Wachs (D-La Crosse): Resolve not to sue your fellow Democrats when you lose the August gubernatorial primary.

Supreme Court Justice Shirley Abrahamson: Make it your New Year’s resolution to enjoy life a little more by retiring. It’s not like you are ever going to be in the majority again. Just think of all of the editorials praising you for your long career, the newspaper columns echoing every thought you have about your more conservative colleagues. Enjoy them now by retiring. We promise UW-Madison will immediately hire you to teach at the law school. On second thought, maybe you should stay right where you are.

Andy Gronik: Resolve not to sue your fellow Democrats when you lose the August gubernatorial primary. If you break that resolution, don’t have your lawyer tell everyone you’re dying.

Sen. Tammy Baldwin: This year, resolve to apologize to the families of veterans who suffered after your office ignored a report on the deplorable situation at the Tomah VA Hospital. Start by practicing your apology in the mirror, rather than using a political fixer to single out a staff member to blame. It may not be the politically advantageous thing to do, but it’s the right thing to do.

Wisconsin Supreme Court: This year, resolve to take up the case of Professor John McAdams’ lawsuit to get his job back at Marquette University. Don’t just punt by deferring to the university’s interpretation of McAdams’ contract which guaranteed him academic freedom.

Democratic Primary Voters: Your New Year’s resolution is to look at the map from the 1990 election for governor before you cast that ballot to make Madison Mayor Paul Soglin your party’s nominee in 2018. That was a midterm election under a Republican president, too. 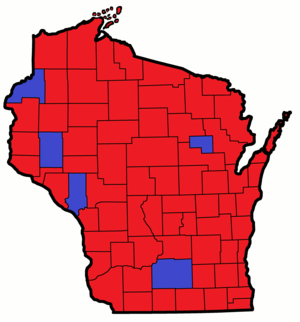 For every Wisconsin politician, make it a New Year’s resolution to not try to emulate President Donald Trump’s twitter posts. Oh, and no calling each other terrorists, too.

The Whining About Brad Schimel Becoming a Judge Continues

Where is Robyn Vining?