MADISON – A newly released poll provides a compelling counterpoint to the Democratic Party “Blue Wave” narrative – at least in the Wisconsin Legislature.

The poll, commissioned by the Brookfield-based Jobs First Coalition, surveyed 600 likely voters in “Wisconsin Target Districts,” eight legislative districts that could very well determine control of the Legislature in 2019.

Republicans hold a slight advantage over Democrats, the poll found, in these districts, with 41 percent of respondents saying they would definitely or probably vote Republican if the elections for state legislator were held today. That compares to 39 percent saying they would vote for a Democrat. A total of 22 percent make up the Lean/Undecided/or refused to answer category of voter in the districts, so despite the bitterly divided nature of Wisconsin politics, there remain plenty of voters to win over.

The poll was conducted by Public Opinion Strategies on July 29-31. The Republican polling firm, led by pollster and researcher Gene Ulm, has been conducting polls in Wisconsin for decades.

Among its key findings, the poll found that Gov. Scott Walker’s approval rating in these key districts is well above water, at 54 percent. Meanwhile, the disapproval rating for the Republican incumbent, seeking his third term, is at 43 percent, according to the poll. 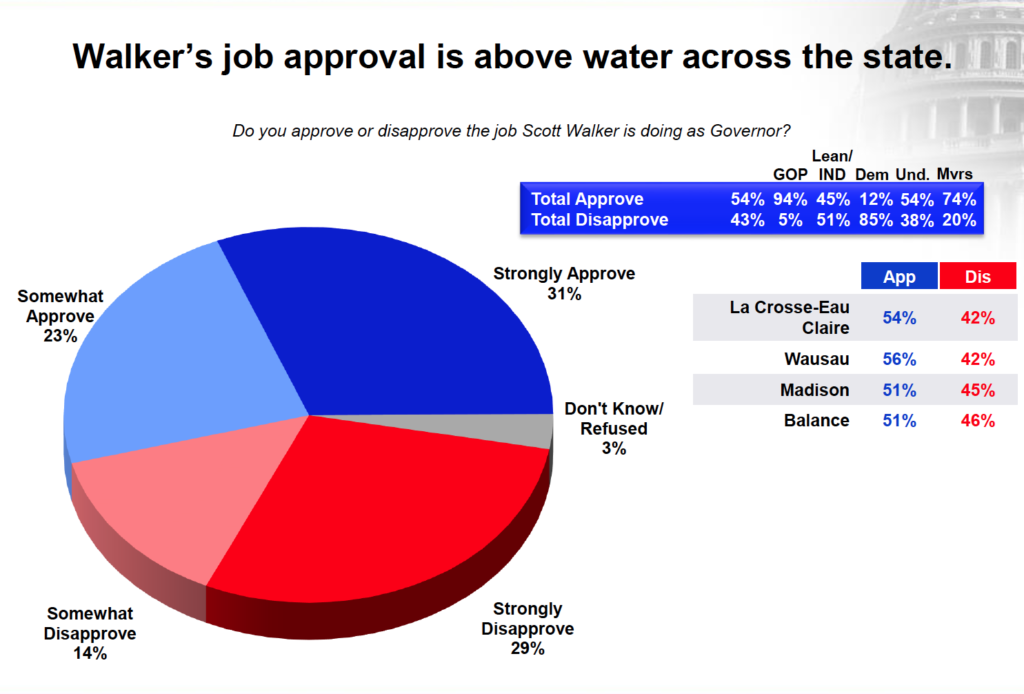 Assembly districts 49, 50, 51, 68, 72, and 85, and Senate districts 17 and 23 – including Chippewa and Eau Claire counties in the west to Grant County in far southwestern Wisconsin – make up these all-important swing districts.

They supported Walker in 2014 and helped turn Wisconsin from blue to red in the 2016 presidential election that saw the surprising victory of Republican Donald Trump.

“They haven’t changed their minds how they voted in the last two election cycles for Walker and Trump,” Jensen said of voters in the legislative districts.

Walker’s job approval rating was 47 percent, with 45 percent of respondents disapproving, in the most recent statewide Marquette Law School poll last month. The governor’s numbers rose to 52 percent approval when voters were asked whether Wisconsin was headed in the right direction.

But it’s in the smaller target districts, which gave Walker critical support in the 2012 recall election, where the 2018 general elections will be won or lost, Jensen said. And Walker holds an 11 percentage point favorability lead here.

“Gov. Walker is in a very strong position in the swing districts around the state where the Legislature’s control will be determined,” Jensen said.

Many of these swing districts include so-called “pivot counties” that voted for Republican Trump in 2016 after voting for Democrat President Barack Obama in 2008 and 2012, according to Ballotpedia. Wisconsin had 23 of the 206 pivot counties in 34 states.

Trump’s job approval rating in the eight swing districts is right-side up, as well. The Jobs First Coalition poll found 49 percent of likely voters approved of the president’s job performance, while 47 percent disapproved. Like several other polls, Trump had significant support (89 percent) among voters in his party, and perhaps more impressive, 49 percent approval among undecided voters and 61 percent among the “Movers” category. 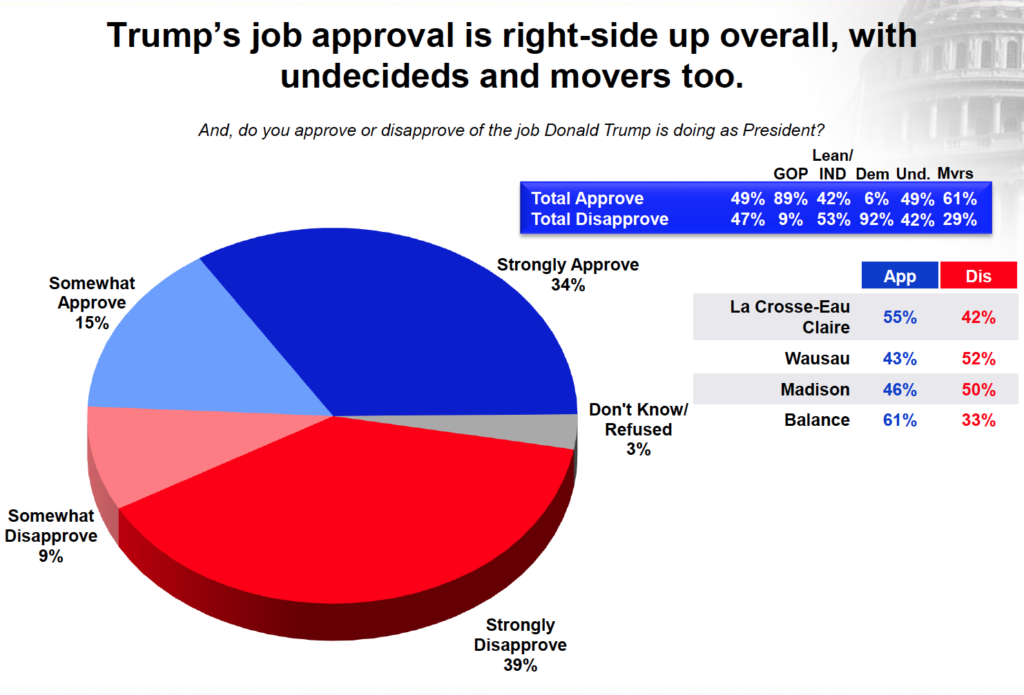 While mid-term elections historically have run against the party in power, the latest polling figures suggest some potential lessening of that trend.

The poll found that health care and public education should be the main focus of state government, or anyone hoping to be elected to serve.

Twenty-three percent of respondents ranked health care as a top policy concern; 23 percent of Republicans, 27 percent of Democrats, and 22 percent of Independents.

Improving education was a top priority for 21 percent of respondents, with 37 percent of Democrats and 22 percent of Independents saying so. Only 7 percent of Republicans surveyed put the issue at the top of the priority list.

Improving the economy ranked third on the primary focus list, with 13 percent of likely voters in the target districts ranking jobs and economic growth the number one priority – 22 percent of Republicans, but only 11 percent of independents and 5 percent of Democrats. 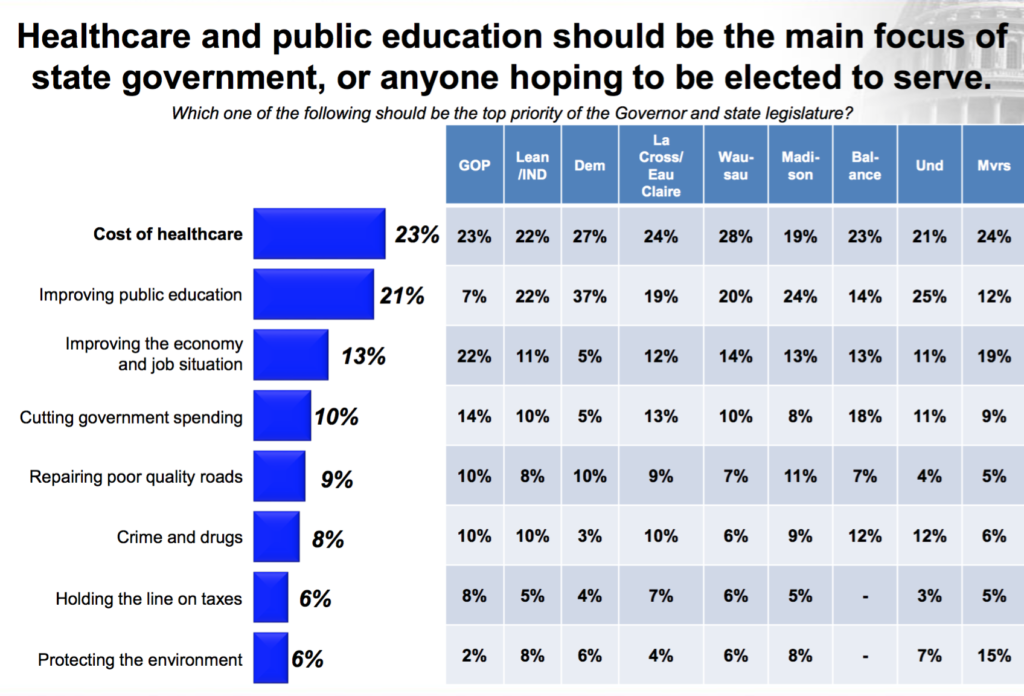 Despite all of the legislative battles over the state of Wisconsin’s roads and funding for them, 9 percent of the poll’s respondents said road repair was a top issue.

And 6 percent of likely voters in the target districts say holding the line on taxes is the biggest policy concern. Another 10 percent said they wanted to see a reduction in government spending. Not surprisingly, 14 percent of Republican respondents cited shrinking the size of government as a major issue, while just 5 percent of Democrats said so. 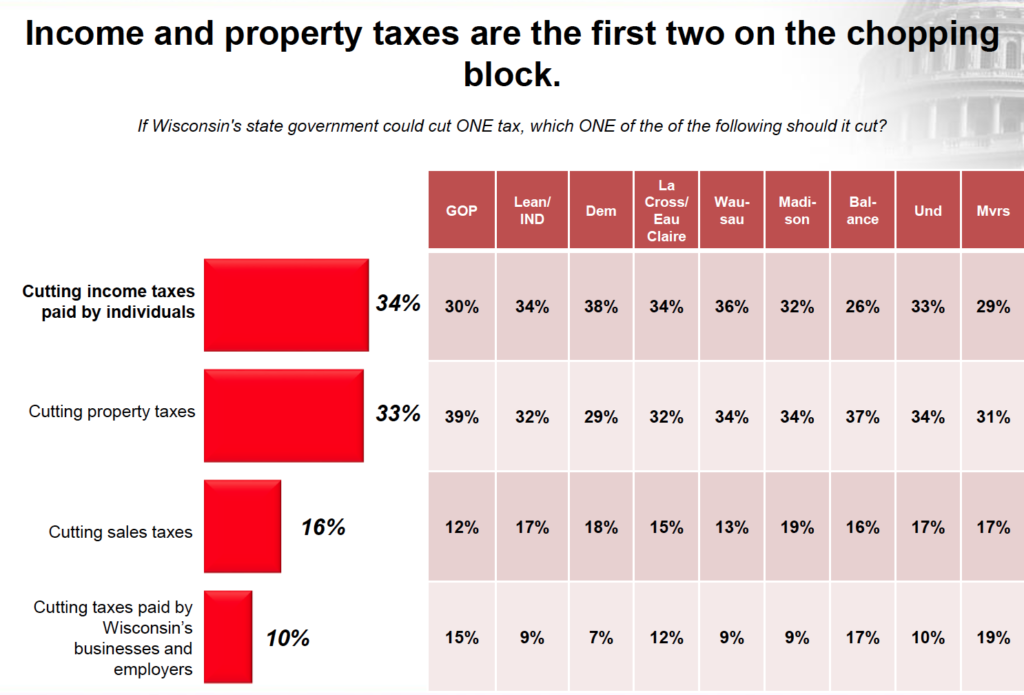 The MacIver Institute has proposed “A Glide Path To A 3% Flat Income Tax,” which would go a long way in reducing the tax burden in a state long known for its high tax rate rankings.

The poll looked at a number of controversial ideas or proposals from Democratic candidates, including tax increases, non-resident voting, and a sweeping prison inmate release plan. Those ideas did not test well in the swing districts.

A vast majority of respondents – 71 percent – said they were “Much Less Likely” to vote for a Democratic candidate who wants to release half of the inmates currently in Wisconsin’s prisons; 12,000 convicted felons, some of which are serving time for committing the most violent crimes like murder and rape.

That bold idea comes from Democrat gubernatorial candidate and Madison ultra-liberal, Kelda Roys, who told the Milwaukee Journal Sentinel last month that she would halve the prison population through more parole options, the release of ill and aging inmates, and legalizing marijuana.

The poll found 66 percent of respondents were less likely to vote for candidates who support allowing non-residents to vote in Wisconsin elections.

More than half of respondents weren’t crazy about a liberal proposal to raise Wisconsin taxes by $460 million. That provision is part of Rep. Chris Taylor’s proposed amendments to the state constitution. That’s the price tag of Assembly Democrats’ progressive income tax. 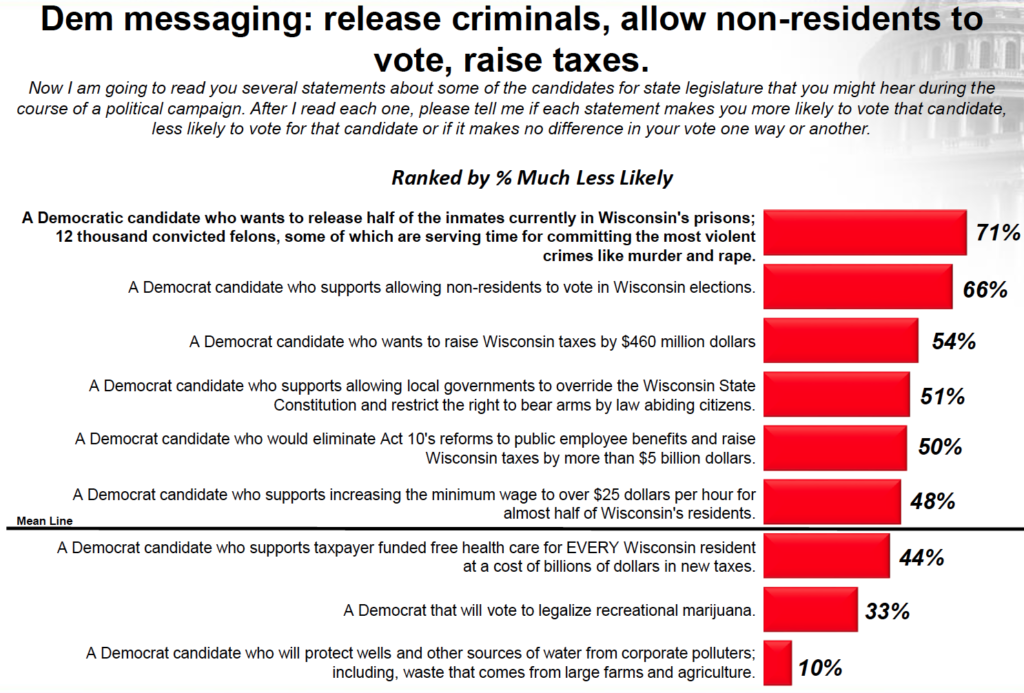 The Assembly Democrat manifesto also includes a provision allowing local government to regulate the carrying of arms, effectively gutting the Second Amendment and the state’s concealed carry law. The poll found more than half of respondents were much less likely to vote for a Democrat candidate who supports allowing local governments to override the Wisconsin state constitution and “restrict the right to bear arms by law abiding citizens.”

But only 33 percent of likely voters said they would be less likely to support a Democrat who would vote to legalize recreational marijuana. Fifty percent of Republicans said as much, while just 17 percent of Democrats sounded opposed to such a proposal.

A majority of poll respondents (51 percent) support the Foxconn incentives deal, with 24 percent strongly in favor, and 27 percent somewhat in favor. On the other side, 30 percent of the likely voters surveyed were strongly opposed, and 13 percent somewhat opposed.

“A lot of Democrats are counting on (the Foxconn deal) to be one of their issues that’s going to help them capture the majority, and I just don’t see that,” Jensen said.

The Governor’s War on Christmas