Nearly 54 percent of active union members left the Wisconsin Education Association Council (WEAC) between 2012 and 2017, according to data from the Education Intelligence Agency. That’s the largest drop-off in the country over the last five years. The union now stands at just 32,130 active members.

The trend is even more stark when compared with the union’s pre-Act 10 heyday. Before the passage of the landmark collective bargaining reform law that gave public employees the freedom to decide whether or not they want to join a union and pay dues, WEAC had 98,000 members. That means its member rolls have declined by 67 percent since 2011.

In just the last year, WEAC’s membership drop was 4.9 percent, continuing a trend of educators choosing to walk away from the union. In 2016, MacIver News Service reported that the union had declined to just 36,074 active members.

The trend continues at the national level. National Education Association affiliates in 36 states reported union membership losses over the 2012-2017 period. While WEAC led the pack, North Carolina’s teachers’ union reported a decline of 44.9 percent over the last five years, and a decline of 8.2 percent in just the past year. The next closest state was Tennessee, where the union’s membership dropped 34.3 percent. 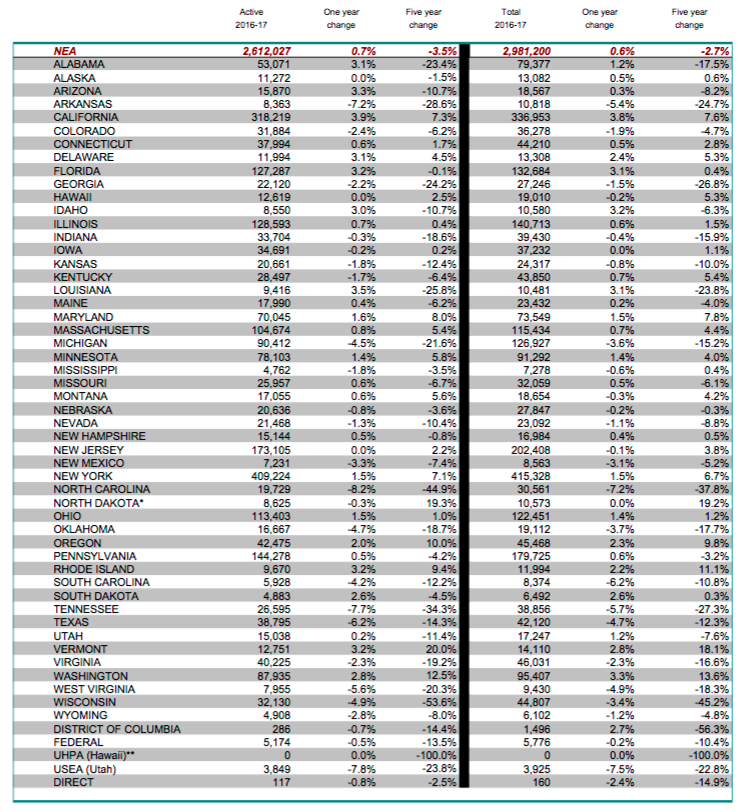 The exodus of members has, in turn, cost WEAC financially. As MacIver News Service reported earlier this year, the union suffered a decline in revenue of nearly 19 percent between 2014-15 and 2015-16, the largest decline of any teachers’ union in the country. That was the second year in a row that the union boasted that dubious distinction.

The state’s Right to Work law, passed in early 2015, extended that freedom to all workers.

And earlier this summer, the U.S. Supreme Court ruled in the landmark case Janus v. AFSCME that so-called “agency fees” nonmembers had been forced to pay to unions are also illegal.

The Hop’s influence is a flop

One-third of Wisconsin voters plan to vote absentee in November