Family Income and Taxes in 2010

In a previous note I discussed trends in household income in Wisconsin, which has shown strong growth in recent years. However the growth in family income has been even stronger, and combined with a reduction in the state tax burden since 2010, this has led to an improvement in living standards for Wisconsin households. In particular, a representative Wisconsin family of four in Wisconsin has seen income grow by 13.1 percent in real terms, and 14.3 percent after accounting for state taxes.

Again, I rely on the American Community Survey (ACS), but now focus on four person families. The table below summarizes the results. There I show the values from the 2017 and 2010 ACS in current dollar terms, as well as a conversion of the 2010 levels to 2017 dollars for real comparisons. 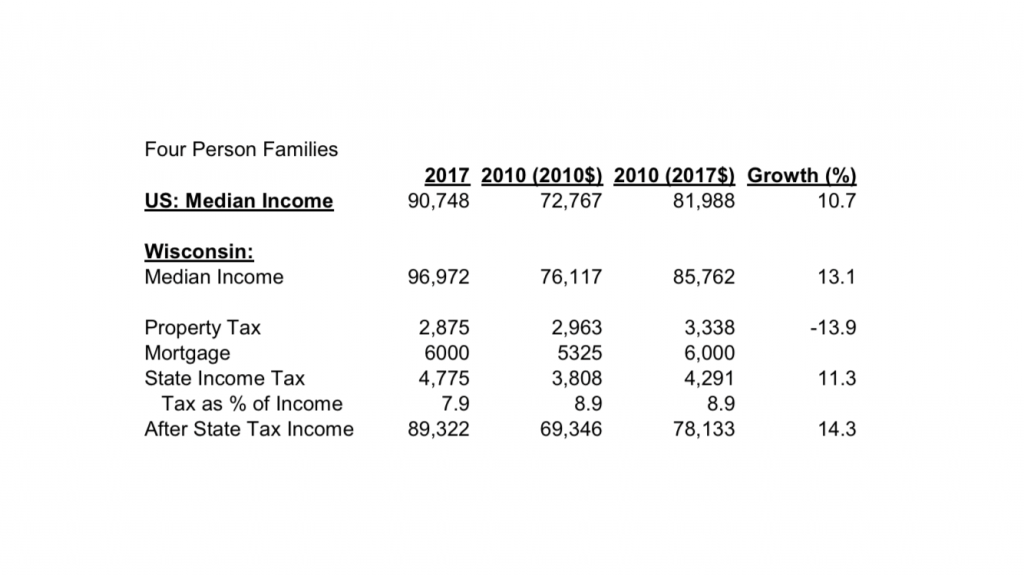 In 2017, the median income for four person families was $96,972 in Wisconsin, as compared to $90,708 nationally, a difference of over $6,000 or 6.9 percent. In addition, since 2010 the gap between Wisconsin and the United States average has grown, with real incomes growing a cumulative 13.1 percent in Wisconsin, compared to 10.7 percent nationally.

In addition to the growth of incomes, Wisconsin has seen a reduction in tax burdens since 2010, for both property and income taxes. In particular, as the state Department of Revenue notes, the property tax bill on a median-valued home fell from $2963 in 2010 to $2875 in 2017. Although this difference is less than $100 in nominal terms, it amounts to a $463 reduction in real terms, or a decline of 13.9 percent in the property tax bill.

To analyze the impact of the changes in state income tax rates, I assumed that the four person family was comprised of two adults and two children. Moreover, I assumed that the family paid $6,000 in mortgage interest on their home in 2017, which is roughly the average amount for a family of this income. (In particular, according to the IRS the typical mortgage interest claimed by Wisconsin taxpayers in this income range in 2015 was $5,900 as shown here.) Then I used the NBER TAXSIM calculator to determine this household’s state income taxes, which amounted to $4,775. I did the same for the 2010, using the median income and property taxes in that year, and scaling the mortgage interest so that it had the same real value.

As shown in the table, not only did property taxes fall in real terms, but the real value of state income taxes increased by less than the increase in real income (11.3 percent vs 13.1 percent). Altogether, the fraction of the family’s income which went to state income and property taxes fell by one percentage point, from 8.9 percent to 7.9 percent, and thus after real income after state taxes grew by 14.3 percent from 2010 to 2017. This amounts to a total real gain of $11,173 for this representative family of four, of which $938 comes from the reduction in the state tax burden.

From the Center for Research on the Wisconsin Economy.

Evers Agenda: Big Government Is Back In Fashion In Governor’s Office