We asked a number of prominent Republican legislators to give their reaction to Governor Tony Evers’ state budget address Thursday night on the RightWisconsin Hotline. Below is the audio for each of the legislators’ responses and excerpts from each of their statements.

“I suspected the budget would increase spending, but even I was shocked at the level of spending in Governor Evers’ budget. This budget spends $84 billion. That’s over nine percent spending increase and over seven billion dollars in government growth.

“I held out hope that Governor Evers would extend a willing hand to partner with the legislature for the good of the state. Instead he loaded his budget proposal with inflammatory, liberal policies including driver’s licenses for illegal aliens, taxpayer funding for abortion providers, repeal of right to work, and reinstitution of prevailing wage. On top of that, Governor Evers wants to create 701 new government positions to further grow the bureaucracy.

“Make no mistake. This is a budget by government and for government.”

“I was struck by how incredibly vague it was. It was certainly short on specifics and long and spending.”

“There was no mention of any method of how Governor Evers is going to cover any of his spending increases which they were references to many of them in the budget, in the address.”

“So I think the media has an awful lot of work to do here in the next couple of days as this budget comes out to find out all of the things that Tony Evers was not willing to mention in the speech. Because it’s pretty clear he’s going to have to raise about every tax in sight in order to cover all of the increases and spending he was talking about.”

Assembly Speaker Pro Tem Tyler August (R-Lake Geneva):
“He’s rejected our olive branch by proposing this liberal budget full of liberal radical ideas. And it’s clear that he is more interested in politics than governing, including lying about Republican investments in K-12 education over the last eight years. I’m particularly alarmed by the enormous cost to taxpayers that would result from this unnecessary expansion of government. When a budget starts with a surplus, it makes no sense to increase the tax burden on families and job creators and to spend us into a deficit.”

“You know, I think we’re very disappointed. Governor Evers campaigned on bringing people to the table, however, Republicans were not even consulted before he rolled out, literally, one of the most liberal budgets in Wisconsin history. His plan is going to raise the tax burden on manufacturers and potentially send the cost of private health insurance skyrocketing. So, he has hurt the ability of low-income students to escape those failing schools as well with the school choice stuff. So very disappointing evening, and forces the Republicans that kind of go back to the drawing board and come up with a plan that’s responsible and keeps Wisconsin on the right track. So we’re hopeful we’ll do that.”

“It was a big payback to the special interests who got him elected and it was very clear that he was not interested in doing what’s in the best interest of Wisconsin taxpayers. Because what he talked about was spending and raising taxes and that’s not what our Wisconsin citizens want at this point. The Marquette poll said that most Wisconsinites, the majority, felt that we’re on the right track. This budget puts us back to the future and that it’s $6 billion of spending, new spending. And that would be $1,000 per man, woman and child of spending which is unacceptable. The governor said this is the people’s budget. Well, in my district, I don’t hear a lot of people saying, ‘Yeah, give me a bill for $1,000. I would love to pay that.’ I think that Tony Evers is not in touch with the average Wisconsinite.”

Tonight, I heard more and more partisan posturing and political pandering from Governor Evers. The reality is that his facts, the facts don’t support his suppositions. For instance, he claims that expanding Medicaid is essential to improving access to health care and yet Wisconsin has the 9th lowest uninsured rate in the nation, and our uninsured rate has improved dramatically over the last eight years under Republican policies. You know, even in in terms of education, I mean he wants to project himself as the education governor, but at the same time the Milwaukee Public Schools under his reign as the Superintendent of Public Instruction had an average reading of failing to meet expectations. What I heard tonight is that he wants to increase government spending and raise taxes. He wants bipartisanship, and yet, he seems to suggest that he’s got a better way. You don’t poke somebody in the eye and then say, ‘I want to be friends.'”

“After eight years of sound fiscal management, it has given us a great opportunity to fund our priorities. Governor Evers’ budget proposal dumped a blizzard of spending on Wisconsin residents. It’ll be a tough task to dig out of, but we cannot allow the people of Wisconsin to be buried by reckless spending which will put a deep freeze on Wisconsin’s economy. The governor’s budget is clearly a Madison-first budget that uses Madison math to pay for things we cannot afford. As a member of the Joint Finance Committee, taxpayers will always come first when crafting the next state budget.”

“I think Wisconsin voters finally got to see tonight what they voted for in November, which is a Madison liberal budget that dramatically increases spending in a time where we have record revenues coming into the state coffers. The spending increases in Tony Evers’ budget will raise spending by more than $1,000 for every man woman and child in the state. This, even given the record revenues, is unaffordable and unacceptable and will not pass the Wisconsin legislature. Assembly Republicans stand shoulder-to-shoulder with the Senate Republicans in denouncing this tax-and-spend liberal budget that Governor Evers introduced tonight.”

“Well Governor Evers certainly seemed to have missed the voices of my constituents in his budget proposal tonight. As I talked with my constituents and other Wisconsinites, they have real concerns about freezing the school voucher program. School choice is making an incredible difference for families all across Wisconsin and talk of freezing this program will shut off families searching for education options and better futures for their children. It’s the wrong way to go. Also absent from from Governor Evers’ budget is the voice of Wisconsin taxpayers. A 20 percent gas tax increase will move Wisconsin into the top ten for the highest gas tax in the country. And that’s not the only tax increase. Contrary to the governor’s campaign pledge, Governor Evers wants to raise taxes on manufacturers, homeowners and anyone with an electric bill. The way I see it, this budget is by and for Dane and Milwaukee counties, and I expect that the rest of the state will be more adequately represented when legislative Republicans incorporate their input later on this year.”

“Well, obviously this budget is disappointing, but not surprising. So, when I look at what Tony Evers ran on, and unfortunately was elected in November, it was about finding common ground, bipartisanship, turning the corner. But in fact, what he’s trying to do is relive the past. His budget is so far out of touch with what Wisconsinites are focused on. If you look at his budget not only does it greatly expand welfare, it takes away work requirements for people who are on public assistance. Repeals right to work. You know, it’s really unbelievable. It’s a document that’s not even really serious.

“Of course, working with Republicans would mean that we had a chance to sit down and talk about some of those things. There was no conversation. So unfortunately, we’re probably going to have to start from scratch and work our way up. So it didn’t have be this way, but it’s disappointing that it has to be.

“So this budget is simple in the standpoint of how I look at it. It increases spending by over $1,000 for every man, woman and child in the state. It has the largest property tax increase in over, in almost a decade. And on top of that, it’s got spending in here that is totally not sustainable in the long run.

“It actually drives up our long-term deficit and makes our budget situation worse, not better. So hopefully this is a document as the people of Wisconsin see it, with more sunshine on it, they’re going to quickly realize that it’s not serious and certainly not one that reflects the values of the state of Wisconsin. So I’m optimistic that luckily we have a good strong conservative majority in the legislature who’s focused on what Wisconsinites actually care about. And that’s reasonable funding for public schools, and not raising income or sales taxes, and trying to make sure that we also focus on helping the vulnerable while not breaking the backs of the middle class.”

The Proof is in the Pudding: Tax Cuts Work

WILL @WILawLiberty
53 minutes ago
ICYMI: WILL filed a motion for contempt this morning after the City of Racine ignored a Wisconsin Supreme Court order to allow schools to reopen for in-person learning.

WILL @WILawLiberty
4 hours ago
NEW: WILL files motion for contempt after the City of Racine ignores a Wisconsin Supreme Court order and tells schools to remain closed. 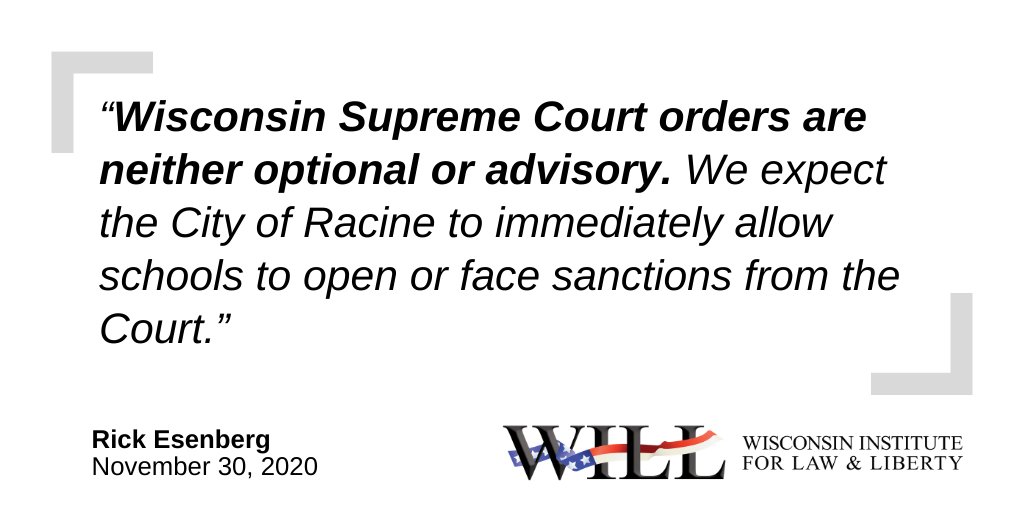