Wisconsin should join neighbors Minnesota and Michigan, and several other states, in authorizing the creation of these licensed mid-level professionals

By JASON HICKS and MORRIS KLEINER for the Badger Institute

Wisconsin has a dental access problem, especially among economically disadvantaged populations. Minnesota has improved access to care by allowing for dental therapists, which are mid-level professionals similar to nurse practitioners or physician assistants in the medical profession.

Additionally, a handful of other states, including Michigan, recently have authorized the creation of dental therapists. Our evaluation of the research indicates that underserved populations in Wisconsin would benefit by adopting the dental therapy model.

Licensed dental therapists perform preventative and restorative procedures, such as fluoride application, cavity repair and extractions of diseased teeth, under the supervision of a dentist. They practice in locations that serve low-income and underserved populations.

According to the U.S. Department of Health and Human Services (HHS), Wisconsin has among the lowest rates of dental treatment among all states for the more than 550,000 children who receive dental benefits through public insurance programs such as Medicaid. Dental access is also a problem for adults, particularly for the disabled, the elderly and lower-income populations.

More than 90 percent of Wisconsin’s 72 counties have at least one area with too few dental providers per capita, and in 2017, over 1.2 million residents (more than 20 percent of the state’s population) lived in areas designated by the federal government as dental care shortage areas. Further, Wisconsin had over 41,000 emergency room visits for preventable oral health conditions in 2015, at a cost of nearly $28 million.

The 2009 law establishing the dental therapy program in Minnesota should serve as a model for Wisconsin. While the overall rate of dental care utilization by Medicaid recipients in Minnesota has not changed significantly over the past decade, largely due to the Affordable Care Act (ACA) dramatically increasing the number of Medicaid recipients in the state, a variety of studies have found that the vast majority of patients seen by dental therapists are enrolled in Medicaid or other public health care programs with reimbursement rates lower than fees typically charged by dentists.

Minnesota dental clinics that hired dental therapists also experienced an overall growth in the number of new patients with public insurance, suggesting that therapists are expanding access to care for disadvantaged and underserved populations.

As of 2018, some 86 licensed dental therapists were providing care in Minnesota. Using that number as a baseline, the addition of an equivalent number of dental therapists in Wisconsin could reduce the shortage of dental care providers identified by HHS and the size of the underserved population by up to 42 percent.

It’s also important to note that extensive research, both internationally and within the United States, clearly shows that dental therapists provide patients with high-quality dental care. Studies directly comparing care provided by dentists and dental therapists found that therapists performed at least as well as dentists. For example, in Alaska, the presence of dental therapists in rural, Native American communities was associated with fewer tooth extractions and more preventative care treatment for both children and adults.

The professional and practice relationship between dental therapists and dentists is like that between nurse practitioners or physician assistants and physicians. Research clearly indicates that allowing these mid-level practitioners in the medical profession to treat patients at the full extent of their license, including practicing independently and prescribing drugs, reduces treatment costs without reducing quality of care.

Much as the dental lobby currently opposes the creation of dental therapists, the medical lobby in the 1970s strongly opposed the creation of nurse practitioners. Physicians today, however, recognize mid-level health care providers as an integral component of the health care workforce.

Some argue that the solution to the dental access problem in Wisconsin is to more heavily subsidize dental care through higher Medicaid reimbursement rates. A better alternative is the creation of the dental therapy profession in Wisconsin.

This reform would increase access to and utilization of oral health care services, improve oral health outcomes for disadvantaged and underserved populations, keep dental care prices down and create new jobs without imposing an additional burden on taxpayers.

Jason Hicks is a Ph.D. candidate at the Humphrey School of Public Affairs at the University of Minnesota. Morris Kleiner is a professor and AFL-CIO chair in Labor Policy at the Humphrey School and co-author of “At What Cost? State and National Estimates of the Economic Costs of Occupational Licensing.”  Reposted here with permission from the Badger Institute.

House Speaker Paul Ryan at the March for Life

Sensenbrenner Not Running for Re-Election

WILL @WILawLiberty
32 minutes ago
WILL Director of Education Policy @LibbySobic touted the benefits of a new bill intro'd by @RepGallagher to establish a grant program to increase financial literacy. 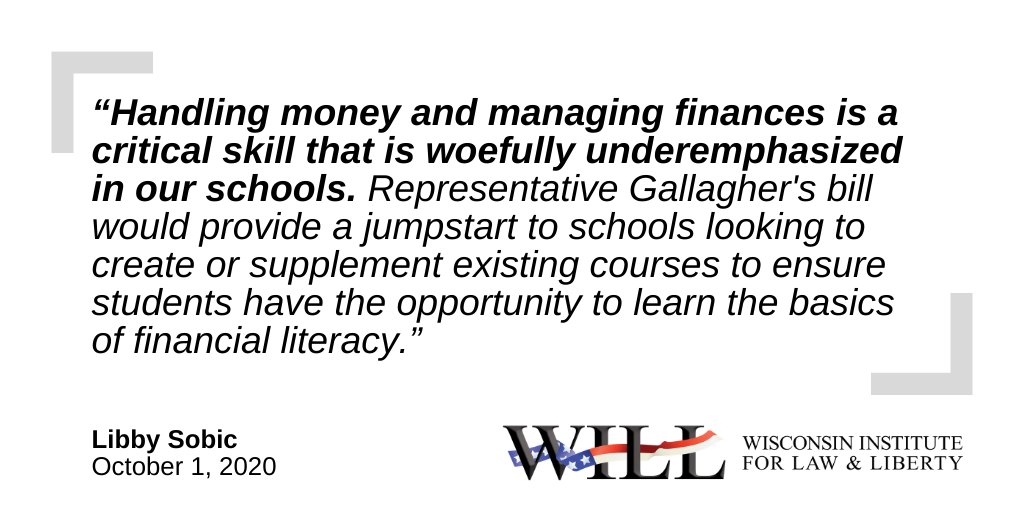 WILL @WILawLiberty
9 hours ago
. @RickEsenberg: "When there is an emergency declaration, the governor can essentially rule by decree... that is a departure from our normal constitutional order... the Governor is declaring one emergency after another. "
View on Twitter
3
11