Two years ago, when Speaker Paul Ryan retired, his replacement, Bryan Steil became the stalwart replacement that we needed in a time of indecent actions. Steil, while never serving in the military, had the support of those of us who did, from combat to peacetime veterans, from wounded warriors to those who came home completely whole. We, as a veteran community in southern Wisconsin, cast our votes in favor of protecting the sacred rights that were given to us because of our service to our nation.

This election cycle, running against Steil, is an ex-federal government employee, Roger Polack. Polack worked for both the Bush and Obama Administrations at the U.S. Department of Treasury as an analyst and finance director in Afghanistan for seven years.

However, on September 25th, Polack released a campaign ad which made the claim “I’ll serve you, as I did in Afghanistan” with numerous pictures of him in military gear. 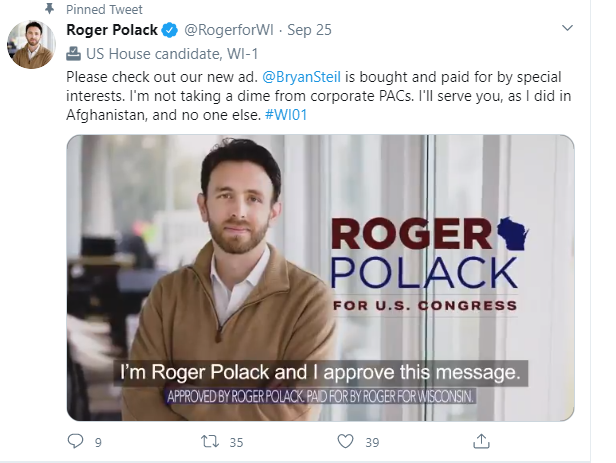 These images, along with the ad’s words, “and he knows something about real service … he deployed to Afghanistan to take on the Taliban,” gives the viewers the distinct impression that he not only spent time in the military, but that he was a combat veteran.

This could not be further from the truth.

In reality, this ad straddles the line of Stolen Valor, the legal term where individuals who exaggerate their service or, as in the case of Polack, never served a day in the military their entire life.

I spent eight years working active duty for the Marine Corps. In my generation alone, I had three older brothers who also served in the military. Two of them are combat veterans, one of which retired from the Army after 20 years of service. My father spent almost 20 years as a submarine officer in the Navy, serving throughout the Cold War. My grandfather was shot in France during World War II and died a few years later due to complications from that wound. Due to that, I never met my grandfather.

No, Polack is not a military veteran.

Stolen Valor, as a legal way of fighting against individuals who have decided to take our time in the service and try to make it their own, is an imperative tool to combat fraud and unearned benefits from the perceived notion that one served in the United States military.

Yes, Polack is a fraud.

His ad uses his time working for the federal government, working as a financial analyst, to dupe the veterans of southern Wisconsin into voting for an individual who did not put on a military uniform while swearing to obey his superior officers and uphold the Constitution of the United States against all enemies, foreign and domestic, but tries to gives the image that he has.

Polack thinks that veterans in southern Wisconsin are not bright enough to realize his Stolen Valor, or are not courageous enough to stand up to him against it.

Polack is wrong for Southern Wisconsin.

Devin Gatton is a veteran residing in the 1st Congressional District.

10/18/20 Editor’s note: Civilian employees of the federal government do take an oath to uphold and defend the Constitution, just not the same oath as the military. The article has been changed to reflect that, and RightWisconsin regrets the error.